Sri Lanka Food: As food has a bearing on the culture of a people and vice versa this is not peculiar as the relationship of these two social factors is universal although varying from place to place and race to race. While it is so, a tourist to this beautiful Island Nation of Sri Lanka needs no alarm as the host country serves a vast gamut of the gastronomic delights soothing any palette form any country. However, if as a visitor one would like to indulge in the indigenous variety there are many versions to exploit from. Whether spicy, mild hot or sweeter renditions they are amply supplied together with the western, Chinese and other Asian types.

Theoretically, the population consists of a larger proportion of Buddhists and Hindus who do not encourage meat consumption. But as fusion is unavoidable it is not a hundred percent vegan population and met is moderately relished by most. Due to emerging revelations about the danger or unhealthy consequences of meat consumption there is an aversion of such by a good number. And of course the strictly vegetarian segment also form a sizable segment. But this does not deter the others who cannot withhold from including meat in any gourmet. As for a western visitor it will not pose a problem for, dishes and preparations are available based on the fleshy stuff. Fish and a host of seafood too are abundant anywhere especially in regions close to the Sea. 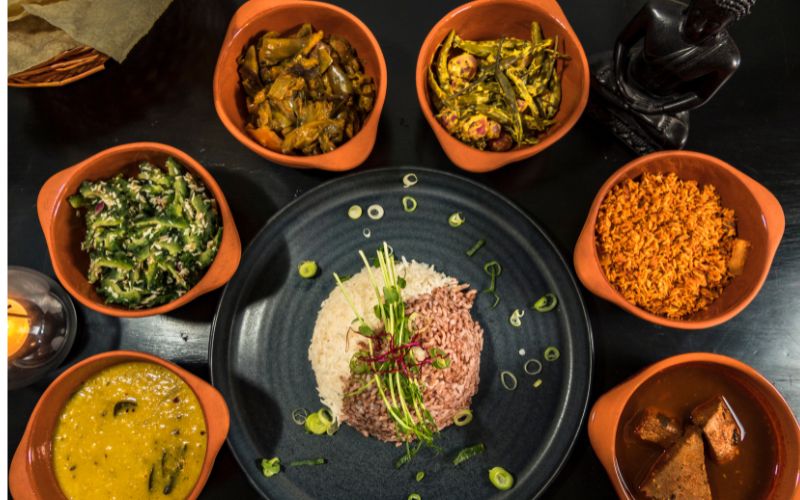 Sri Lanka being a religious nation particularly the 4 foremost i.e., Buddhism, Hinduism, Christianity and Islam, the respective annual festive days incorporate special menus that are traditionally preserved. And some of those have auspicious times of eating and drinking and also with certain protocols during the celebrations. The folk jealously hold on to these traditions as they give them the exclusive identity and pride. So, when the foreigners participate in these celebrations there is a mutual spirit of respect shared within the hosting locals and the tourists. Even weddings have traditional dishes to represent certain concepts.

Apart, it is good to know the values and tastes of the indigenous varieties. The staple food of the Lankans is Rice and Curry. The latter is limitless in forms, while rice too come in different kind some akin to the land and some others, imported. Usually, the Star hotels meant for the tourists serve Basmati rice, having longer grains generally, a Pakistani variety. But there is the Samba Rice which too is soft to the palette and is easily ground by any teeth. May kinds of dishes are compatible to these two varieties. And there is the red rice which is preferred by the health-conscious diabetics.

Spice is inextricable in all Sri Lankan food. They are mainly for hygienic reasons and for the aromatic essence. They come in many forms such as leaves, barks and either raw or dried forms of corns and seeds. Some of these are believed to control gastritis effects of food and also help digestion as well as proper distribution of vitamins in the blood circulation. Some also prevent Cholesterol and carcinogen developments. One needs not to fear spiciness as they are mingled with food and they sting is hardly felt.

Fruit goes hand in hand with all cuisine wherever you dine and the local varieties of banana, pineapple, papaw, mango, watermelon and the Jack are the dominant dessert kinds. The first three mentioned here mix into a fruit salad dressed with ice cream or custard to be relished after a good meal even with a beverage either cool or hot. Watermelon of course is preferred as a cooling agent.

The menu cards on the table will certainly give you a wide range to choose!

When you book with an account, you will be able to track your payment status, track the confirmation and you can also rate the tour after you finished the tour.
Sign Up

Or Continue As Guest

Continue As Guest
Chat here
Need help?
Hello,
How can I help?